13 Books About the Moon for the little Lunatics!

On January 31, roughly half of Earth will be treated to a total lunar eclipse. As the moon moves through Earth's shadow, it will slowly disappear from sight, only to re-emerge within a few hours. The celestial event provides an excellent opportunity to introduce children to the science of eclipses and kindle their interest in Astronomy.

A good book can feed a kid's obsession or inspire a new interest in exploring the wonders of the universe!! Here, we have put together a collection of moon-themed books for them to explore. This listicle includes both fiction and nonfiction. Not only can kids learn actual facts about the moon, but the fiction books help kids use those facts to stretch their imaginations! These books are a perfect addition to any lesson on astronomy - particulary the moon - for kids!

The Moon Wants To Be Spotless White by Priya Narayanan The vain Moon is devastated when he finds out about the dirt patch on his otherwise pristine white self. He wants to be scrubbed and cleaned by Dhobi Kaka to regain his spotless beauty. The moon cunningly manipulates Mitu into helping him out in this mission. But how will mitu get the moon down to be cleaned? Will kaka be able to restore the moon s spotless beauty? Will mitu be turned into an owl for not keeping her promise? Join in the fun-filled adventure of the Moon, Mitu and Dhobi Kaka, as the trio set out on their mission to help the Moon become spotless.

Moon Ramu and I by Geeta Dharmarajan A fantasy book for little children to embark on a discovery of space. It is an imaginative journey of a little boy who wants to take a trip to the Moon. His grandparents, mother and his pet, Ramu join him in his venture. The family uses different pieces of furniture from the house to create a ladder on top of a hill to take them to the Moon. Kids will enjoy this fun-filled, whacky expedition to the moon. Maybe, someday, it could arouse their curiosity to make journeys to different planets and their moons. The mode of journey to different planets would of course, depend on the imagination of each reader! The illustrations by Harshvardhan Kadam enlivens the book and creates many interesting images for a child to muse over. A good layout, with minimal text on each page, add to the visual appeal of the book. 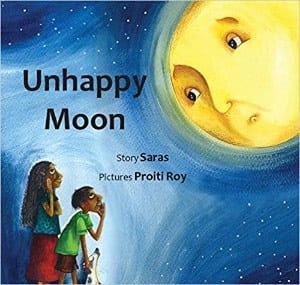 When Sun was out people did things, but when Moon appeared all they did was sleep! Moon isn’t happy – she too wants to be noticed. So starting from where the three seas meet at the tip of India, she goes to the mountains at the very top, trying to ruffle up waters to announce her presence. But nothing works. She then follows the advice of her ocean friends and works at what she is good at. She shines and shimmers, waxes and wanes… and soon people are singing songs and writing poems about her! Proiti Roy’s luminous illustrations evoke the moon’s many magical moods, and the changing landscape as it travels across the country.

Look, The Moon! by Sandhya Rao and Trotsky Marudu Sometimes a circle, sometimes a slice and soon not there at all . . . This picture book in simple verse urges a child to look out of the window each night to watch the 'moon show' in the sky — it's waxing and waning. Echoing the text, the illustrations are deliberately childlike and capture the grand sweep of the night sky.

The Moon Book by Gail Gibbons If you Decide to Go to the Moon by Faith McNulty This story is a fun way for kids to learn all kinds of facts about traveling to the moon and back while imagining they are going to go there themselves. Children learn what’s necessary for travel and what it’s like once they are in space.

How the Moon Regained Her Shape by Janet Ruth Heller, Ben Hodson This story, influenced by Native American folktales, emphasizes building self-confidence and understanding the phases of the moon. After the sun insults her, the moon gets very upset and disappears. With the help of her friends, the moon gains more self-confidence each day until she is back to her full size. The Creative Minds section explains the phases of the moon and also includes moon crafts and games. This bestselling picture book about a kitten, the moon, and a bowl of milk, written by the celebrated author and illustrator Kevin Henkes, was awarded a Caldecott Medal. From one of the most celebrated and beloved picture book creators working in the field today comes a memorable new character and a suspenseful adventure just right for reading and sharing at home and in the classroom. It is Kitten's first full moon, and when she sees it she thinks it is a bowl of milk in the sky. And she wants it. Does she get it? Well, no . . . and yes. What a night! Winner of the Caldecott Medal, an ALA Notable Book, a New York Times Best Illustrated Book, and winner of the Charlotte Zolotow Award. A captivating, comprehensive, and accessible look at the Moon, illustrated with spectacular full-color photographs. The search for a detailed informational book all about the moon is officially over! This book contains almost every piece of information that a student would need to complete a project regarding the moon. In addition to the plethora of lunar information this book provides, this book is also organized very well; with easy to read and understand text and images to reinforce the information being given.

If You Were the Moon by Laura Purdie Salas, Jaime Kim What would you do if you were the moon? You'd spin like a ballerina, play tug-of-war with the ocean, and light a pathway for baby sea turtles. Discover the many roles the moon plays in this lyrical picture book. Beautifully illustrated book about the moon and all the jobs it has. Just how important is the moon? The story is fun, yet full of facts to keep kids engaged. 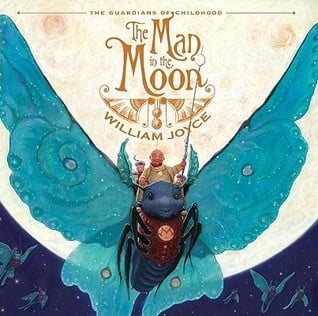 A fabulous, beautifully illustrated book that tells a unique story about the man in the moon. This is one of those books that reads like a movie you'd want to take your kids to see. It is filled with absolutely amazing artwork and a fantastic story. Have you ever wondered who or what lived on the moon? William Joyce's debut The Man in The Moon not only introduces to the jolly man who lives there (nope I'm not talking Santa Claus), he'll also tell you how he got there. This book is a beautiful, creative story that will allow your children's imaginations to sore. Children will enjoy being whisked away in this whimsical story.

When the Moon is Full by Penny Pollock 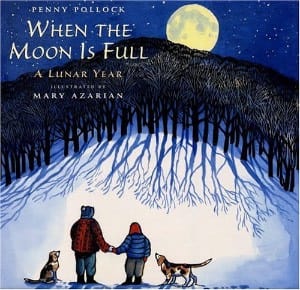 This lunar guide describes the folkloric names of twelve moons according to Native American tradition and showcases their defining characteristics in short verse and beautifully detailed hand-colored woodcuts. A question-and-answer section includes information about the moon's surface, an explanation of a lunar eclipse, and the true meaning of a blue moon. In Imagine the Moon, Gerald Fierst marries poetic imagery with fascinating expository text to create a compelling introduction to the calendar’s full moon names. Leslie Stall Widener’s richly detailed ink-and-watercolor illustrations guide the reader through the natural rhythms of the changing seasons as illuminated under the full moon.